Your Brain on Alcohol: How Much is Too Much?

If you’ve kept up with your readings – meaning our blogs – you’ll recognize the term “brain shrinkers.” However, if you’re new to our posts and thus have no clue what a brain shrinker is, no worries, I’ll give you the gist. Brain shrinkers – what I’ll refer to as “shrinkers” moving forward – consist of anything that cause your brain to shrink over time. This includes psychological disorders such as depression and anxiety, chronic stress, lifestyle habits such as poor diet choices, lack of physical activity, drug and alcohol abuse, insomnia, so on and so forth. And while I could spend this time discussing why and how each shrinker damages your beautiful brain, I’m not going to do that. Instead, we’re going to talk about the one shrinker that’s most intoxicating. You know the one – booze.

Before you fall down the proverbial rabbit hole and start worrying that I’m going to tell you to stop drinking altogether, wait to hear what I have to say. Frankly, I don’t care about the single glass of wine that you have with dinner a few times a week. Even moderate alcohol consumption, defined by the Center for Disease Control (CDC) as one to two drinks (which can be one or two of  a) 12 oz. beer with 5% alcohol; b) 8 oz. malt liquor with 7% alcohol; c) 5 oz. wine with 12% alcohol; d) 1.5 oz. of 80-proof with 40% alcohol) per evening is not cause for serious concern, although some research has shown that it can increase a woman’s likelihood of developing breast cancer by 0.55% over the course of her lifetime. What I’m most concerned about, however, is a pattern of heavy alcohol use. No, that one night two weeks ago when you drank five or more alcoholic beverages on a single occasion (i.e., binge drinking) does not qualify. However, if you’re a man consuming 15 or more drinks in a week, or a woman consuming eight or more drinks in a week, that’s cause for concern. 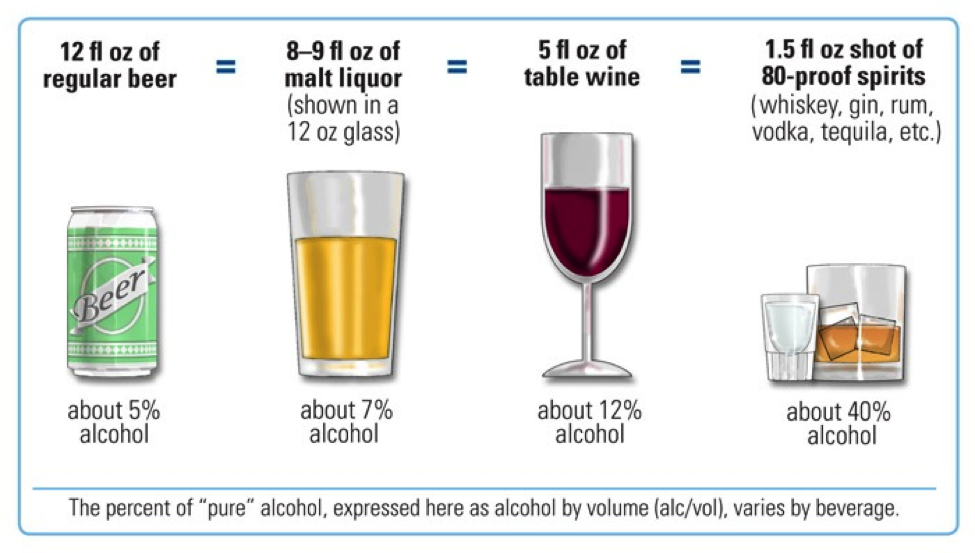 Your Body on Alcohol

So, what happens when you drink? Well, as you down your first beer, that liquid gold is absorbed through your stomach lining into your bloodstream, followed by diffusion into your body’s tissues. After 20 minutes, your liver starts to metabolize the alcohol; one ounce every hour. So, if you drink until your blood alcohol content (BAC) reaches the legal limit (0.08), it’ll take about five and a half hours to leave your body. While the amount of time it takes to expel the alcohol from your system does not vary widely from person to person, several factors do effect BAC and the amount of time it takes to reach the legal limit.

Factors that affect absorption and tolerance:

Biological Sex: Dehydrogenase, the enzyme that breaks down alcohol in your tummy, is lower in women than in men. So, if Jill and her buddy Joe drink the same amount in the same amount of time, Jill will have a higher BAC. 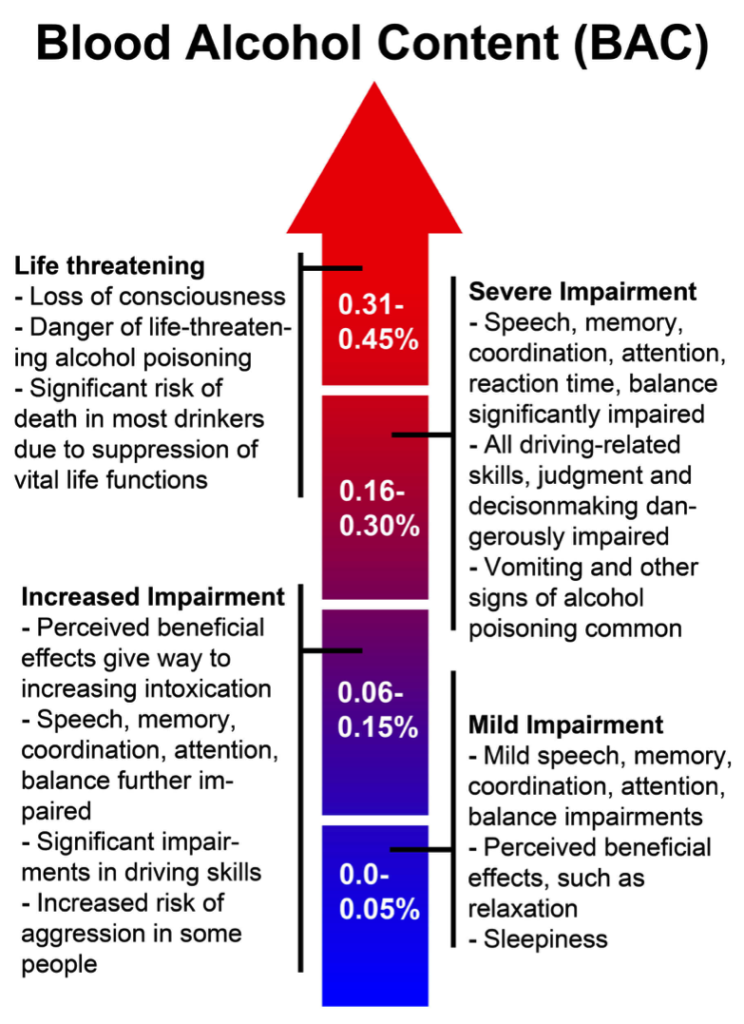 Hormones: They impact your body’s ability to process alcohol. Drinking the same amount of alcohol during menstruation will result in higher BAC.

Body Fat/Weight: Women usually have greater percentages of body fat and lower percentages of water compared to their male counterparts. So, even if Ann and Dave weigh the same, Ann will likely achieve a higher BAC at a faster rate.

Your Brain on Alcohol

It takes roughly five minutes for alcohol to reach your brain and 10 minutes for you to notice behavioral/emotional changes. You know that feeling of euphoria that you get within several minutes of starting to drink? Yeah, that’s normal, it happens during the early stages. Subsequent stages of alcohol consumption include depression and disorientation (0.05 BAC), excitement (0.09-0.25), and confusion (0.18-0.3), to name a few; increase in BAC gives rise to new feelings and behaviors.

As I’m sure you know, drinking impacts several regions of the brain. When you’ve reached the “excitement” stage and are experiencing slurred speech, blurred vision, feelings of impulsivity, and loss of fine motor skills, that’s a result of your frontal, occipital, temporal, and parietal lobes being affected. If we’re being technical, what’s really happening is alteration of neuron membranes, enzymes, ion channels, and receptors. What’s important for you to know is that moderate drinking and rare binges won’t have any long-term effects on your brain. As Dr. Fotuhi states in his book “Boost Your Brain,” “drink no alcohol and your brain will experience the usual degradation that happens with age; drink some and you’ll see reduced damage; drink too much and injury to the brain shoots through the roof.” 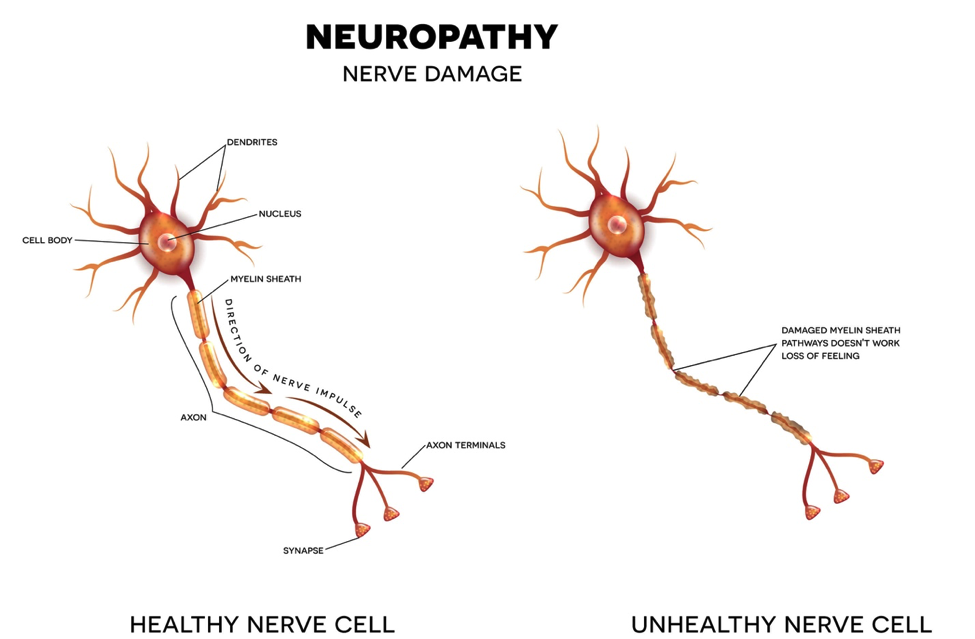 That brings me to the topic of long-term brain damage. As I’m sure you’ve heard before, alcohol abuse kills brain cells. The areas impacted the most include your cerebellum, cortex, and hippocampus, the areas responsible for hand-eye coordination, balance, decision-making, and general task and cognitive performance. Abuse of alcohol also damages myelin (i.e., the protective coat around the axon of the neuron; the highway that enables chemical messages to get from one neuron to another), which results in severe nerve damage. Some alcoholics may even develop a disorder called Wernicke-Korsakoff syndrome, a disease that causes vision, coordination, walking, memory, and learning impairments.

–Be nice to your liver. Remember, the liver starts to metabolize drinks after one hour. If you drink until your BAC reaches the legal limit, it’ll take around five and a half hours to completely expel it from your body.

–Different factors affect BAC. If you’re a female and you’re drinking with your male friend, remember that you will achieve a higher BAC in a shorter amount of time – blame higher percentage of body fat, hormones, and dehydrogenase levels!

-You drink too much, but you don’t know what your next step should be. Contact the National Drug and Alcohol Treatment Referral Routing Service, available at 1-800-662-HELP. You’re not alone. Don’t be afraid to ask for help.

If you want to learn more about the effects of alcohol on the body or brain and how you can improve your brain function, check out Dr. Fotuhi’s Brain Fitness Program at NeuroGrow.com.

This blog was written by Brianna Sirkis and edited by Dr. Majid Fotuhi.

How Alcohol Impacts the Brain

Alcohol’s Effect on Brain and Behavior

This is Your Brain on Alcohol

Factors that Affect How Alcohol is Absorbed and Metabolized